Betty finished teaching early yesterday, and in celebration, she decided to take the boy person friend to Botany Downs. Botany Downs is a mall built like a proper village, in which one wanders around actual lanes and sees the sky; it’s nice, but it takes about half an hour to get there. On the way, the boy person friend decided to get something to eat at Sylvia Park, and so they nipped in for a few minutes. Sylvia Park is the nearest thing this forgotten country has to a decent mall. It has a Borders, a cinema, a Theobroma chocolate cafe, many shoe shops, a Kathmandu, a vertical bungee, and a place where one can cast one’s hands in wax. They took a keek at the foodcourt, but it was uninspiring; the boy person friend then lit up a little inside and led the way to Wagamama.

Betty had  the yasai katsu curry with crumbed kumara and eggplant, and miso and pickle on the side. It was, as always, awesome.

Then they lost interest in going to Botany Downs and started looking around. The boy person friend bought a pair of shoes to replace his extremely dead ones, which he left rather forlornly in a bin. 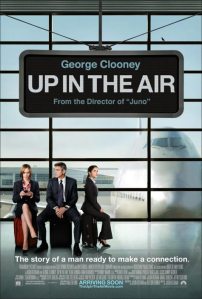 Then Betty and the boy person friend went to see Up in the Air. They saw it on the Extreme Screen, or some such, which apparently holds the Guinness world record for the biggest 35mm projection screen in the entire world. The movie had been hotly anticipated in the Bettiverse for a couple of weeks, for reasons that are now obscure; it had Jason Reitman, Jason Bateman, and, of course, Clooney. It was long, and dragged a bit in the second act; in the interests of veracity, Betty must report that it was also tatty with plot-holes and occasionally (and forgive the cheap allusion) kinda phoned in some of the conflict.

Nevertheless, Betty was sold. Nice, she said to herself as soon as it finished. Nice work. It was bleak, and not just in the ways that were immediately obvious from the trailer, but really bleak; and it was crafted in such a way that it turned out much like its leading man, smooth, but still rough around the edges. Its three central characters were uniformly ambitious and, in fact, loathsome; and yet they managed to trundle on with their lives in parallel, never truly intertwining, and therefore illuminating each other from all angles. Vera Farmiga, as the older woman with a crush on Clooney (as opposed to the younger woman with a chip on her shoulder) was remarkable. The final scene, in which Clooney gave a pithy voiceover, was both sad and satisfying, and therefore awesome.

And then Betty and the boy person friend went to the supermarket, which is one of his most favourite things in the world to do, and then they left. The end. It was nice.

At Theobroma at St Luke’s the other day I had this soy hot chocolate. They do an interesting chilli hot chocolate, too, and if you get a big one it comes in a mug with a candle underneath it. Chocolate and open flame — a truly Betty combination. It’s not a perfect chocolate: it mostly makes me wish there was a Koko Black or even a Max Brenner in the country, but nonetheless, chocolate does the trick.

Great are you, O Lord, and exceedingly worthy of praise; your power is immense, and your wisdom beyond reckoning. And so we men, who are a due part of your creation, long to praise you – we also carry our mortality about with us, carry the evidence of our sin and with it the proof that you thwart the proud. You arouse us so that praising you may bring us joy, because you have made us and drawn us to yourself, and our heart is unquiet until it rests in you.